A 25-year-old male presented with eye complaints and a 2 month history of recurrent redness, pain, and an anterior stromal corneal infiltrate.  The patient was immunocompetent; the condition was thought to be viral.  The following image was seen on the Gram stain. 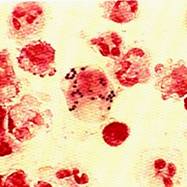 Scroll Down for Answer and Discussion

Answer and Discussion of Quiz #70

This image strongly suggests a positive Gram stain with gram-positive microorganisms, other than a virus.  Routine cultures were negative.  Other stains revealed the following: (left to right) H&E, PAS, silver. 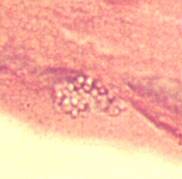 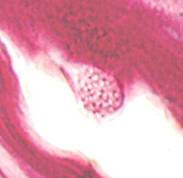 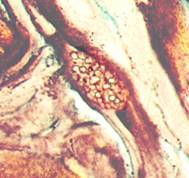 Another specimen was stained with Ryan’s modified trichrome stain (see below).  Also note the diagram of the spore containing the coiled polar tubule. 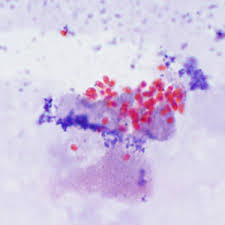 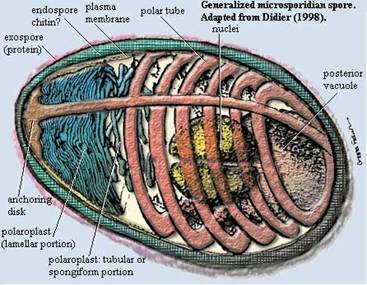 Answers to Questions:
These organisms are microsporidial spores (1-7).  Note:  more color differentiation and details are visible in the special stains.  Although the microsporidia are true eukaryotes (i.e., they possess a typical eukaryotic nucleus, endomembrane system, and cytoskeleton), they also display molecular and cytological characteristics of prokaryotes, including features of the translational apparatus and genome size (range of bacteria), and lack recognizable mitochondria, peroxisomes, and typical Golgi membranes. These unusual features are thought to reflect their primitive eukaryotic nature. However, it is now well recognized that these unicellular organisms are best described as representing one of many offshoots of the fungal kingdom. Phylogenetic studies have confirmed that the microsporidia evolved from the fungi, being most closely related to the zygomycetes. Other features that are shared with fungi include the presence of chitin and trehalose, similarities in cell cycles, and certain gene organizations. Microsporidia are now considered to be highly derived fungi that underwent genetic and functional losses, thus resulting in one of the smallest eukaryotic genomes known.

The microsporidia are obligate intracellular organisms that have been recognized in a variety of animals, particularly invertebrates. Typical sizes range from 1.5 to 5 µm wide and 2 to 7 µm long; unfortunately, the organisms found in humans tend to be quite small, ranging from 1.5 to 2 µm long. Until recently, awareness and understanding of human infections have been marginal; only with increased understanding of AIDS within the immunosuppressed population has attention been focused on these organisms. Limited availability of EM capability has also played a role in the inability to recognize and diagnose these infections. However, with the introduction of newer diagnostic methods, the ability to identify these parasites has definitely improved. The organisms are characterized by having spores containing a polar tubule, which is an extrusion mechanism for injecting the infective spore contents into host cells. To date, several genera have been recognized in humans: the more common, Encephalitozoon and Enterocytozoon, and the less common, Brachiola, Pleistophora, Trachipleistophora, Vittaforma, Septata, Anncaliia, Tubulinosema, and Microsporidium.

Microsporidia have been recognized as causing disease in animals as early as the 1920s but were not recognized as agents of human disease until the AIDS pandemic began in the mid-1980s. Several earlier human cases had been reported but were thought to be very unusual. Currently, with more than 1,300 species of microsporidia, one would expect confirmation of additional human parasites in the future.  Since 1990, hundreds of microsporidian keratoconjunctivitis cases have been reported, in both HIV negative and positive patients, however, only a few reports have identified the organisms to the specific genus level other than Microsporidium.  Common features include follicular papillary conjunctivitis and coarse punctuate epithelial lesions evolving into keratitis before resolution. Additional clinical features include diffuse, inflamed corneal endothelium with corneal edema and atopic keratoconjunctivitis (rare, affects young men with atopic dermatitis). Almost all of these cases resolved with the use of topical fluoroquinolone monotherapy

Comments on Diagnostic Methods:
Many eye infections with various species of microsporidia have been seen in immunocompetent patients; this possibility should always be considered when routine eye cultures show nothing clinically significant or in cases of corneal transplantation.  Keratoconjunctivitis tends to be a self-limiting disease, while stromal keratitis is an ill-defined disease. Stromal keratitis is characterized by a slowly progressive course. The corneal picture resembles herpes simplex virus stromal keratitis or fungal keratitis cases, and is characterized by deep stromal infiltrates with overlying and surrounding stromal edema and keratic precipitates.

A number of histologic techniques are available for recovery and identification of microsporidia in clinical specimens. Although the organisms have been identified in routine histologic preparations, they do not tend to stain predictably if at all.  Spores are occasionally seen very well by using PAS stain, silver stains, Giemsa stain, or acid-fast stains. Modified Gram stains have also been found to be sensitive although not always standardized. The spore has a small, PAS-positive posterior body, the spore coat stains with silver, and the spores are acid-fast variable.  Modified trichrome stains have been found to work quite well on routine clinical specimens (Ryan’s blue or Weber’s green modified trichrome stains).

Comments on the Infection:
With the increases in the number of cases of ocular microsporidiosis, these cases are almost exclusively found in immunocompetent individuals and, although previous cases were chronic, difficult to manage, and responded variably to only specific drugs, recent cases have resolved with a wide array of commonly available topical ophthalmic antibiotics or with no therapy in a period of a few weeks.  With the lack of recognition of these infections, it is highly likely that they are severely underreported.

Comments on Therapy:
Fumagillin (soluble salt Fumidil B) has activity against microsporidia, and solutions applied topically have been used in corneal infections. The effects of this drug are static rather than cidal, and relapses of infection occur when the treatment has been discontinued.  Itraconazole can also be recommended to treat ocular, nasal, and paranasal sinus infection caused by E. cuniculi parasites when albendazole treatment fails. In a patient with sinusitis and keratoconjunctivitis the symptoms completely resolved with itraconazole treatment (200 mg/day for 8 weeks) after albendazole therapy (400 mg/day for 6 weeks) was unsuccessful.

Each Quiz has a two section format: the first section will present the Quiz topic and the second section will provide a discussion of the answer and/or various options in response to the Quiz situation presented to the user. In some situations, there may be more than one correct response.

The content within this site is made possible through the extensive contribution of Lynne S. Garcia, M.S., MT(ASCP), CLS(NCA), BLM(AAB), F(AAM), Director, Consultantation and Training Services (Diagnostic Medical Parasitology and Health Care Administration). For additional information, she can be contacted at LynneGarcia2@verizon.net.